Here is the long delayed report on my trek around the Annapurna.
It was my intention to start the trek from the village of Besisahar on the East side of the circuit then follow the trail anti clockwise crossing the Thorung La and eventually finishing in Beni.
Unbeknown to me quite a few things had changed on the Annapurna Circuit in the last few years. For starters the road now reaches as far as Kudi although the section from Besisahar onwards is unpaved. My bus actually stopped still terminated in Besisahar and rather then spending an hour or so lurching from pothole to pothole I decided to walk. It only took me to hours to walk the distance saying something about the speed of the bus or more to the point the lack there off.
The first real days walking took me first gradually then more steeply up the trail to Bahundanda then a plunge into the valley to Ghermu and Jagat. By the time I arrived in Jagat I had walked nine hours with only a single break for lunch I was knackered.

Farm houses just on the way down from Bahundanda
The second day I took a bit easier took longer rests and made sure that I had a good breakfast before setting off. The trail now starts to steeply climb towards Dharapani and then in the following days to Chame and Pisang where it flattens out into the Manang valley and eventually to my acclimatisation stop at Braga. 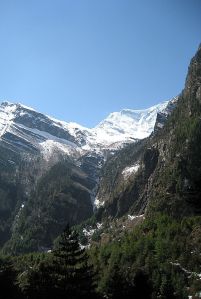 Some of the first mountain views on the trail. 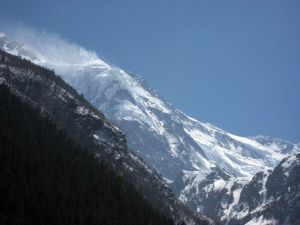 More great scenery.
I spent three days in Braga to get my body used to the altitude. It’s almost 3,500 meters high and even small hills seem like an effort. Braga is a typical Himalayan village with flat roofed houses that blend into the hillside and with only the Gompa and Chortens having any color on it.

Chorten between Braga and Manang

Interior of the Braga Gompa

View from the top of Braga Gompa

From Braga it’s a short almost level walk to Manang and then a steep climb to Yak Kharka. Then the next day it’s on to Thorong Phedi Base camp at 4500 meters altitude. As I didn’t fancy the long hike up to the pass from there I spend another night at High camp which is close to 5000 meters before getting up early next morning and making the final ascend to the pass.

Preparations at Base camp

Hikers slowly making their way to the pass. 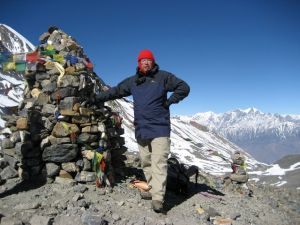 I have made it to the top yet again!
The way down the pass is steep and hard on the knees but once in Muktinath you know that all the hard work is over. The trekking is now in the rain shadow of the mountains so there is far less snow and ice to contend with and the scenery at times looks as much as a stony desert as it does like the Himalaya.
Unfortunately on this side of the mountain is also a massive road building project going on and already you have to share what once was a track with motorcycles and tractors. In another twelve months when work looks likely to be finished up here you can take a bus all the way to the foot of the Thorung La. So enjoy it while you can.

A desert with realy pretty views.