The knee is still not quite right today, and I’m tossing up between going to Lukla and flying out and doing a shortish walk to Puyan and hope it sorts itself out. 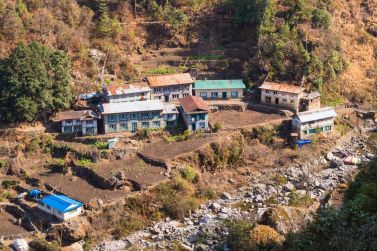 I decided on walking and four hours later made it to Puyan and treated myself on a Fanta and a Snickers bar my body felt as if it needed the sugar. The walk itself was a long climb up to a small pass and then a gradual descent to Puyan in variable weather, but it seemed a bit cooler then yesterday, and I wouldn’t be surprised if we get some rain later on.
It did rain and hail and thunder, and then the sun came out again, and all is beautiful the dust has been washed out of the air, and the mountain behind us has gotten a new dusting of snow.